On Saturday I went to DDD Scotland for the first time and really enjoyed myself. Not only were there some really good talks on a range of subjects but the it was great to meet people I interact with on Twitter and make new connections. I managed my schedule for the day using a mobile app created for DDD Scotland by the recently formed Level Up.

The DDD Scotland schedule covered a number of interesting topics and I decided to jump between the tracks to try and get a bit of everything. I started off with From .NET to Rails by Colin Gemmell which is particularly interesting to me since just the other day I tackled my first Ruby on Rails application and even wrote up a small blog post on my findings. Colin's enthusiasm is second to none and it was really interesting to hear that he finds himself to be more productive writing rails applications using Vim than he was building ASP.NET websites.

The second session I went to was Building seriously scalable websites with ASP.NET with and without Windows by Chris Hay. My reasoning behind attending this session was two-fold; I've met Chris briefly for a coffee around a month ago so wanted to make sure I caught up with him again and I've also been trying to build an IAAS (Infrastructure as a Service) product using a combination of Microsoft and non-MS components (Kwwika). I think my tweet about the session pretty much sums things up.

[email protected] is nuts, knows his stuff, is a bit disorganised, uses cool tech & I have a lot more knowledge on scaling than I did 1 hour ago.

I actually knew that Chris had been still putting the presentation together late in to the night before and was even updating things 10 minutes before the session started so the tweet was a bit "tongue in cheek". The main thing was that in everything that Chris did there was a glimpse of another new exciting technology combined with some proven ones; nodeJS, MonoDevelop, redis, nginx and HAProxy all got a mention along with CDNs, ASP.NET, IIS, Amazon EC2 and much more. He also covered techniques that can be used to speed up servers and page load times. Chris mentioned that he will be writing a book on the subjects he covered - where's the pre-order link? :)

I then sat in on two Grok talks. The first was by Aaron Bassett of Level Up delivering 20 Django hints and tips in just 10 minutes. Wow! The second was a thought-provoking grok by Rob Lally (asked to come up with the talk only a few hours beforehand). Rob showed three ways of social interaction to try and achieve the same goal (I wished I had a video recorder) and then went on to discuss how we need to consider how we interact with others in order to achieve goals - with an emphasis on ensuring the goal, and the reason behind it, must be understood.

DDD Scotland also introduced an alternative track so I decided to give that a go next. Mark Rendle gave a talk on How to Manage Your Manager (future managers beware ;)). He explained that managers and developers can be two very different animals but for them to get on they each need to understand how the other works and understand the driving factors behind their decisions. He covered things like shadowing, how to convince your manager that better hardware and software (e.g. faster computers, a 2nd monitor, productivity tools like ReSharper) can improve your productivity and benefit them and general communication tips. I wish I'd known some of those tips about a year ago: for example, ask for a "respond by" date when sending an email and set appointments in your managers calendar as they really are calendar driven and without the calendar to prompt them they can easily forget (as I've found).

Then I attended a session on SpecFlow - functional testing made easy by Paul Stack. This covered what BDD was and Paul explained why he had moved away from TDD. He then focused on showing how SpecFlow made BDD, well, easy. Paul also demonstrated how WatiN can be used to write an acceptance framework for your application driven by specifications written in SpecFlow.

The final session I attended was another alternative track one called Ask the Speakers. This gave me the opportunity to raise my Are .NET developers scared of the tech community and cutting edge technologies? question that I posed and blogged about earlier that week. It really go things going and there were some great points echoing the comments made in my post.

The day ended with some a whole group of us grabbing some food where I was lucky enough to be surrounded by Paul Stack, Chris Canal and Gary Park where we unsurprisingly discussed Continuous Integration, MVC, SOLID, Paul's phone being stolen last week, jobs, tech stuff and quite a lot of nonsense. Generally fun chat!

This was a really good community event which leaned heavily towards the Microsoft technology stack. With my recently blog post stirring up so much comment it was great to see an event like this and raises my hopes that .NET developers definitely do have a sense of community and we just need to get together to re-ignite the interest in Scotland. Microsoft also need to get involved and for the moment one big event a year probably isn't enough. Scottish Developers and Aberdeen developers are definitely doing what they can, and Scottish Developers in particular have now set a high standard with DDD Scotland, but we need to increase the interest in .NET technologies by attending events that aren't purely .NET focused and representing the .NET community.

More information
Here's the schedule from the day and below that there are links to even more information such as other write-ups, slides and photos from DDD Scotland 2011: 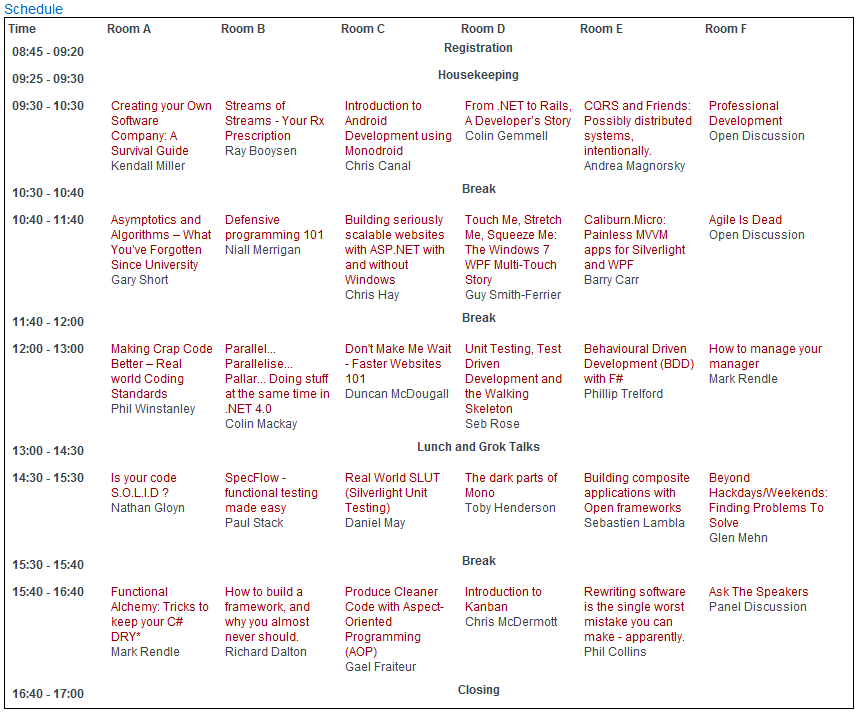