Trying to upgrade my O2 mobile

I’ve been out of contract with O2 for probably around two years now and during this time I’ve been perfectly happy with the XDA IQ that I’ve got. I also carry around a Blackberry that I have for work so use that to browse the Internet, check email, and send tweets. I’ve not also got a 3G USB dongle from work that I can use on the train. All these gadgets have become a bit of a burden and I’ve been considering upgrading my phone to something that I can use as a 3G modem for my laptop, has a reasonable mobile browser, GPS, and has a good set of other applications for it such as Google Maps, a Twitter client, and a Yammer client. I want to replace three gadgets with one.

I’ve been looking at the HTC phones for quite a while since they run windows (I like Microsoft stuff), I can easily sync my contacts and calendar (ActiveSync is still the best for this), I can write .NET compact framework applications for it (I’ve already said I like Microsoft stuff), and HTC are generally up there as one of the best phone/PDA manufacturers.

So, I was delighted when I recently went to the O2 website to see that they have the XDA Serra which is actually the HTC Touch Pro

are available but I would have needed to fork out for the whole phone myself. I’m an existing customer so I went straight to the Upgrades section of the website, requested my upgrade code, chose the Online 20 tariff, and looked for the Web Bolt-on to give me unlimited* data on my phone. The Web Bolt-on isn’t available. 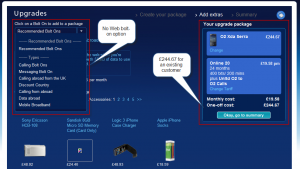 From here I decided to find out if I would get this option I were a new O2 customer. I found out that not only can a new customer add the Web bolt-on but also they get the O2 XDA Serra around £50 cheaper than an existing customer. So, I decided to phone up a “online upgrades advisor” (0800 1313136) to see if they could help me order by phone with the Web bolt-on and at the same price as a new customer would pay. The “online upgrades advisor” was of very little. I was informed that they “don’t have the phone on the system” so the only way to get it was to upgrade online (for a more expensive price and without the Web bolt-on) – No thanks!

After phone calls to O2’s main number as an existing customer (08442 020202) and customer services, and Hertford’s O2 shop I had to phone new sales. They informed me that since I was on the rolling Simplicity deal I would be treated as a new customer anyway. So, I had to set up a new contract, do a credit check, set up a new O2 account, and set up a new direct debit. I also now have to cancel my existing simplicity one when I get my new phone. In addition, if I could have done the upgrade one I could have selected where I wanted my new phone to be sent to. Since I've made my purchase of a new contract over the phone I've had to get my new phone delivered to my registered address and I know I won't be in meaning I'll have to drive out to the delivery depot to collect it.

My point is that I wanted to pay £200 for a new phone and sign up for a 24 month contract worth a good few quid and nobody at O2 seemed too bothered to help me out. Also, I can't believe that O2 force you to get your phone delivered to your registered address. Most people don't work from home so won't be there to receive the delivery. How much customer and delivery driver time must this waste?!

I’m sticking with O2 at the moment simply because they offer the best coverage for where I live. When this contract is up I’ll probably have moved so I’ll certainly consider another mobile provider above O2.