My reply to: Which is the worst Transformer?

I follow Chris Garrett on Twitter and he posted a link to a blog post about Which is the worst Transformer?. As a kid I really liked The Transformers and felt compelled to defend some of them. I posted what is about to follow as a partly tongue-in-cheek comment but it's been "awaiting moderation" for hours so I just thought I'd dump it in my blog. I'm pretty sure that Chris will agree with me about Soundwave as he's got the toy on his desk.

I've got to say that I generally disagree with your choices here. The main saving grace is that your choice of No. 1 naff Transformer is probably correct. I know you've got a car thing going on here but some of the Transformers you list were great characters which surely offsets the things that let the toy down.

My main objection is that you are slagging off a lot of the Transformers that were the main characters in the original 1986 Transformers the Movie that I think completely rocked!  The 2007 version isn't bad but has nowhere near the story or scale of the original move. Give me Orson Welles, Judd Nelson, Leonard Nimoy and Frank Welker (plus the obvious) any day of the week. Give me Unicron, Cybertron, Cybertron's moons, Earth, The Planet of Junk and two massive battles! Wow, I'm going to get the DVD 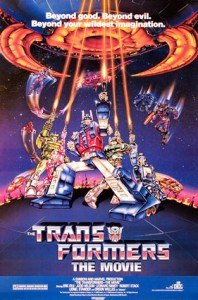 Anyway: Blurr, Arcee, Kup (who doesn't get a mention - good), Hot Rod/Rodimus, Springer and Ultra Magnus were a new group of Autobots who were main characters in that great movie. Ok, Blurr is a bit annoying, but isn't that just because the guy doing his voice (Scatman Crothers John Moschitta Jr.) just repeated the same line over and over again. That's not Blurr's fault, it's the fault of the guy who write the script. The toy may have been crap, I don't know. Ok, I'll give you Blurr too.

Astrotrain - the toy does look pretty pants! In the movie he transports the defeated Decepticons back to Cybertron and needs to "jettison weight", whereby Starscream gets rid of Megatron and we gain Galvatron. So, he has his purpose. I can only assume that the toy was that terrible that for you it justifies the No.8 slot.

Soundwave - What planet are you on? Soundwave is a great Transformer. He was there at the very beginning. He is a vital part of a majority of the Transformers stories. And... And.. And he can eject other small Transformers out of his chest. That's Awesome! "Rumble, Frenzy, Ravage, Ramjet eject!" The toy wasn't bad either. If I remember correctly you could get small cassette transformers (mentioned in the quote) and put them inside his cassette deck. No, he's not a car but he was a great Transformer. You're just plain wrong with this one.

Rodimus Prime - Have you ever seen Transformers the Movie?!? "This is the end of the road Galvatron". He even gets to say Prime's quote of "Autobots, transform and roll out" and it works. He also has a pivotal roll in bringing Optimus Prime back to life in The Return of Optimus Prime (brought back to life, eventually, by a Quintesson.....). So, NO, he's not one of the worst Transformers ever (but his toy did look a bit like a mobile home, hmmm).

Wreck-Gar - Again, the toy may have been rubbish but that doesn't mean he was one of the worst Transformers ever. He is the leader of the Planet of Junk/the Junkions. As you mentioned, he was voiced by Eric Idle, which IS cool. If his arms fall out he can just stick them back in again with some special blue glue (using his legs?). Now that's cool, not crap.

Bumblebee A.K.A Goldbug - He wants to be friends with people so he's rubbish? What? He's one of the first Transformers and deserves to avoid this list on that fact alone. You just can't put any of the Transformers that were on the Ark, which crash landed on earth with Prime, in the list. Period. Oh, and he's a VW Gold...

Jazz - How can anybody say that Jazz is one of the Worst Transformers ever? Jazz wasn't the best in the new movie but they got the character wrong. Jazz has been in Transformers since I can remember and killing him off was just wrong. His toy WAS great. It was one of the first Transformer toys to be made and wasn't all plastic like the more recent ones.  He was on the Ark AND he's a Porsche.

Ultra Magnus - Firstly his toy was actually pretty cool. He could fire rockets. He was bigger than Prime. His cab was exactly the same as Prime's and Prime was a great toy. He "couldn't take over the leadership when the driving drumstick (Rodimus Prime) was in charge" What? Do you mean that he couldn't open the matrix of leadership after Prime had been killed because it wasn't their "darkest hour"? I got an Ultra Magnus one Christmas and my parents still speak to me, and I've just double-checked, like me. You ain't justifying this one buddy! I think he gets a bad rap - leave him alone.

So, I'll give you Arcee, Blurr and, at a push, Astrotrain. Personally, I'd list Wheelie and any of the Insecticons. I'm also surprised that the non-car Dinobots didn't get a mention.

Til all are one!